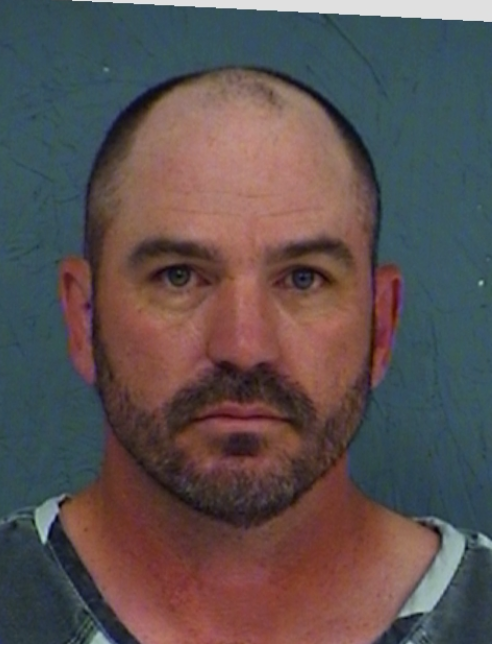 Thomas Jason Doss, 45, of Sulphur Springs, was arrested during a traffic stop at 7:52 p.m. Friday on Interstate 30 at mile marker 110 by Hopkins County Sheriff’s Investigator Wade Sheets and patrol officers on charges of aggravated sexual assault of a child and possession or promotion of child pornography.

Doss was escorted to the Hopkins County Sheriff’s Office, where he was read his Miranda rights and agreed to speak with investigators, according to reports. During the interview, Doss allegedly admitted to possessing multiple images of child pornography, reports said.

Doss also reportedly admitted to having sexual intercourse with a juvenile victim after the juvenile had consumed alcohol that Doss allegedly provided to a point of unconsciousness, reports said. Doss allegedly admitted to taking photographs and videos during the sex acts and that he knew the age of the victim was 14 years of age at the time of the offense, according to the report.

According to investigator Wade Sheets, HCSO was lead to this investigation through “cybertips from an Internet provider.”

“We get tips all the time,” Sheets said. “If anything possibly child pornography is shown or seen on the Internet and comes back to a local Internet user, they’ll send us the tip. We’ll review it, see if it is in fact child pornography and, if it is, we’ll take the steps to figure out who is in possession of that child pornography or who viewed it.”

Sheets explained some child pornography cases are more difficult than others. “Every hour, every minute, every second is crucial in making a case. Some [cases] are fairly simple to figure out and some are a little more difficult. Investigations typically progress a lot slower.”

“In this case, we know he has children, so we had to expedite things on this one. It was a lot quicker than most of these investigations are,” Sheets said.

According to Sheets, HCSO was prepared in any event. “We grabbed him on the highway, had another team at the house, had another team that was still [at the HCSO] doing other things. It was literally a lot of moving parts that we had to [coordinate], and everything had to work just right,” Sheets stated.

“The investigation is still continuing. It’s still very early on. It’ll continue for however long it takes to find all the different evidence and put everything together. Then there would be prosecution,” Sheets explained.

Sheets had high praise for both the FBI and HCSO Chief Investigator Corley Weatherford, who he says was instrumental in making this arrest. “Corley [Weatherford]  put all this together. [He] put in a whole lot of legwork on this case before it ever got to the search warrant, so he did outstanding getting it there. And then the FBI helped out tremendously—a huge shout-out to them. They brought several folks and we couldn’t have done it without them. It was a multi-agency effort,” Sheets said.

“HCSO, there’s no doubt in my mind, that everybody works for the citizens of Hopkins County,”  Deputy Steve Shing added. “They get on things very quickly, do their own investigation, to get the closure to the case and get things done the way the citizens expect from their law enforcement agency.”

Bond has been set at $250,000 on each charge, and Doss remains in custody as of press time, according to arrest and jail reports.